The room was packed. I estimated 200 people were there to hear Carter Neimeyer discuss wolves.  With one lone wolf in Northern California, the bristles of the ranchfolks and townspeople of Yreka are already standing on end.

Carter presented a detailed, factual power-point on many aspects of wolfdom, focusing on livestock issues.  He showed a graph detailing actual predation statistics in the Rocky Mountain Region for the last 25 years. The figures proved that wolves took a mere pittance of the dead or missing livestock in that time period, an average of 130 sheep and 66 cows annually.  This is out of some 6 million cattle and 835,00 sheep in the area.  And over 1,700 wolves were killed by the government in response to this and other factors. That’s about one wolf for every head of cattle lost to wolves.  One would expect the ranchers in the crowd to sit back and relax after learning these numbers.

But they didn’t. They spoke up in the Q & A and disputed these facts as well as many others. They asked why wolves were allowed out of Yellowstone, they questioned the amount of money spent on wolves, they asked if wolf advocates were releasing wolves into the wild, one even suggested that Oregon 7 had been transported to California by such an advocate via pickup. I asked her why anyone who liked wolves would ever consider releasing them among this type of company.

The questions went on for an hour, and Carter stayed cool and collected, responding with facts, maintaining a middle of the road attitude. I was frustrated, but not him.

Afterward, I met Carter and Jenny and spoke with them a bit. What gracious and friendly people they are. And their work is so valuable. They provide exactly what is needed, a steady hand to help cool the hot heads who buy into the negative stereotypes about wolves. 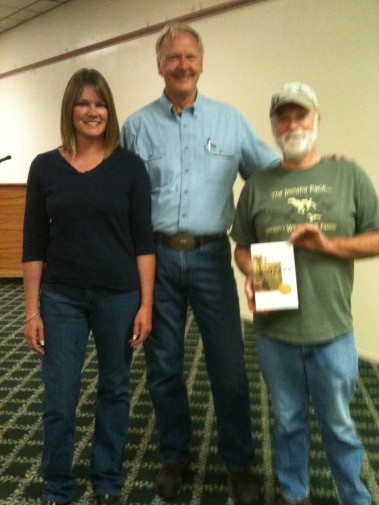 Carter said many wise things, but one that I really enjoyed was, “Wolves aren’t as good as we hoped, and not as bad as we feared.” So true, wolves are simply animals, and ones that deserve to exist in their natural habitat in Northern California and elsewhere.