The Fragile Future of Michigan’s Wolves

Michigan, our final hold out in the state by state war against wolves, is now discussing a wolf hunt. Kristy Lloyd of Wolves of the Rockies, lives in Michigan and has this to say:

“Now that gray wolves have been designated as a game species in MI, the Natural Resource Commission could decide to hold a wolf hunt. Keep in mind that MI is a trapping state. MI’s wolf population came about naturally, there was no introduction. The population was allowed to increase on its own, to succeed or fail. It succeeded. The carrying capacity of wolves is around 1300, there are fewer than 700 (est.). Private citizens and stockgrowers are already allowed to kill “problem” wolves… Since wolves can already be killed for attacking domestic pets as well as livestock, there is no need for a hunting season.”

There is no scientific evidence to verify a wolf hunt in Michigan. The Michigan Department of Natural Resources offers this in agreement with my claim:

The Impacts of Wolves on Deer in the Upper Peninsula

Many Michigan residents are concerned about the impacts of wolves on the Upper Peninsula deer population. The extent of those impacts is influenced by many factors. However, compared to the deer mortality caused by other sources, including other predators, the impact of wolves on the deer population is relatively small. Several studies have examined wolf kill rates, and recent estimates range from 30 to 50 deer eaten by an adult wolf each year. Wolves prey upon a variety of species, and the proportion of their diet comprised of deer changes continuously. Also, an unknown number of deer eaten by wolves may have died from other causes, such as winter conditions or vehicle collisions.

A population of 687 adult wolves (estimated Michigan wolf population in 2011) could eat between 17,000 and 29,000 deer annually. Many of these deer would have died from various other causes if wolves were not present (accidents, winter weather, diseases, etc.). Between 5,000 and 8,000 deer-vehicle crashes are reported annually in the U.P., and even more deer are killed in crashes that are not reported. A severe winter can kill 30 percent (or more) of the deer population. There are about 270,000 deer in the U.P., and hunters killed about 42,000 deer in 2010.

Wolves and deer evolved together, and deer possess physical and behavioral adaptations for avoiding wolf predation.

Representatives from the  state’s native populations are speaking out against the hunt. This quote is from the Interlochen Public Radio station:

Many of the Indian tribes in Michigan are opposed to this legislation right now, and that’s primarily because they feel the wolf has a special status for them. It figures importantly in many of their creation stories. They consider the wolf to be a brother or part of their kin. Here’s what Kurt Perron, the president of the Bay Mills Indian Community, told me about that:

“As we see the wolf returning, or gaining strength, just like we, as Ojibwe Anishinaabe people have, we see that relationship. So that’s what concerns us with the hunt, it’s almost like you’re hunting our brothers.”

Perron also said that by hunting wolves, you really don’t know what’s going to happen in terms of how that affects the pack structure of wolves, since they are pack animals.

The next comission meeting on the subject is tomorrow, January 10. Representatives from the Michigan Hunting Dog Federation, a group very vocal in their opinion that wolves should be hunted, will be there. Advocate Nancy Warren will appear in support of wolves. You and I need to speak up for Michigan wolves as well. Please mail, call or email ASAP: 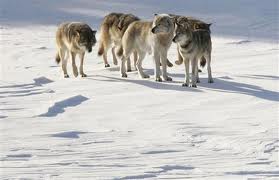 8 thoughts on “The Fragile Future of Michigan’s Wolves”