On a hot August day in 2006 a grey wolf from the Timberline pack was captured and collared northeast of Boise by Idaho Fish and Wildlife biologists. She was given the title B300, but two years later this wolf traversed the Snake River into Oregon where she became known as Sophie, the alpha female of the Imnaha pack and mother to at least a dozen pups, including the world renowned Journey.

A week ago, only ten miles from where Sophie was originally tranquilized and collared, OR 16, an 85 pound yearling black wolf from Oregon’s Walla Walla pack, was shot and killed by an Idaho elk hunter.

OR 16 was born in the spring of 2011. His pack is one of the most north-easterly

packs in Oregon and they also travel into Washington. OR 16 was captured and fitted with a GPS collar on November 1, 2012 north of Elgin (no known relationship to my family, but I wish I could lay claim to the historic Elgin Opera House). He dispersed on December 19, traveled nearly 50 miles to the state border where he crossed the Snake River, or perhaps trotted across the dam at the Brownlee Reservoir, into the shooting grounds of Idaho.

It didn’t take OR 16 long to find prime wolf habitat. Kirkham Ridge, an area 70 miles north of Boise, is full of elk. He was just south of there, near Edna Creek, when he was shot. Not only do wolves find this location a sweet spot, hunters do as well. Dirt bike trails give them easy access to the ridge, and the highway that runs between Boise and Stanley is a popular place to pick out potential trophies. The Idaho Department of Fish and Wildlife (IDFW) flies helicopters over the area to radio collar wolves and elk. No doubt hunters coordinate their outings with these choppers, eliminating a great deal of leg work in locating their prey. Some speculate there is communication between IDFW and the hunters on the whereabouts of wolves. In this high tech world of killing, coupled with an  irrational hatred of wolves, not even the most cunning of animals stand a chance.

Nothing has surfaced online as to who shot OR 16, but the hide of the young wolf was checked in at Boise, per protocol. His GPS collar will be returned to Oregon. Rumor has it OR 16 was traveling with a buddy, a wolf recently collared by IDFW.

OR 16 is the second Oregon wolf to be killed in Idaho within a year. OR 9, a litter-mate of Journey, was shot by a hunter with an expired tag on February 2, 2012.

OR 9, killed near Emmett, Idaho

I wish we could keep our Oregon wolves home, or at least steer them south if they insist on traveling. Although the future is uncertain for wolves everywhere, it looks a little brighter for those residing in Oregon and California. This optimism is due in part to the Pacific Wolf Coalition, formed last month by 25 environmentally-conscious organizations from Oregon, Washington and California, all committed to wolf recovery in the Pacific Northwest.

Another reason to feel hopeful for Oregon wolves is because of the July 2012 lawsuit brought against the Oregon Department of Fish and Wildlife (ODFW) by Cascadia Wildlands, Oregon Wild, Hells Canyon Preservation Council, and Center for Biological Diversity. (Correction here, by Rob Klavins of Oregon Wild: “Though our four groups have brought legal challenges against the state in the past, HCPC was not a part of the most legal challenge that was filed in October of 2011, not July of 2012.”)

This lawsuit has, so far, blocked the ODFW ordered lethal removal of two Imnaha pack wolves that were implicated in livestock predation. Since this action, the wolf population in Oregon has increased to 53, however, livestock predations have dropped. In Wallowa County, 2012 reimbursement for wolf predation claims by livestock producers are estimated to be only about $8,000, 60% less than in 2011. Although there is no definitive answer as to why, it appears the non-lethal measures ranchers were forced to resort to once the option of killing wolves was removed are proving successful. 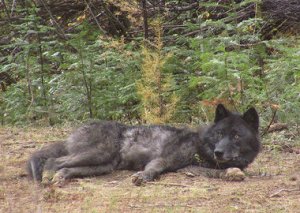 Another wolf dead, nearly a thousand shot or trapped since the species was federally delisted in April of 2011. Yet there remains hope that there are places where wolves are understood and valued as the intelligent and valuable creatures they are. Let’s support the Pacific Wolf Coalition and its entities, and continue to speak out against atrocities such as the loss of OR 16. Perhaps Oregon and California will spearhead a way of living with wolves that is more evolved than Idaho and other states that chose ruthless slaughter over science and morality.

38 thoughts on “Another Oregon Wolf Lost to Idaho Hunter”