It’s Official: Journey is Back in Oregon!

He’s moving steadily northward. After spending most of January and February in California’s Tehema and Plumas Counties, our world renown wolf entered Lassen County around March 4th, Modoc County on the 7th, and then trotted up into Siskiyou County on March 11th. 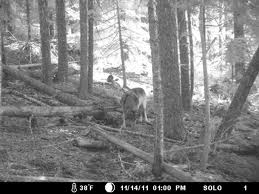 Yesterday, sometime in the evening, he unknowingly put himself in the media spotlight once again by crossing back into Oregon via Klamath County. A year ago this month he came as far west as Jackson County, which is where I live. You can bet I have my binoculars ready and my snowshoes in hand.

I spoke with Michelle Dennehy, Statewide Wildlife Communications Coordinator for the Oregon Department of Fish and Wildlife (ODFW). My first question was whether ODFW would publish daily updates on the location of Journey, as California has. She said, “No, this is a difference in policy between the two states.” As wolves are an endangered species, ODFW does not want to reveal any information that might endanger the animal. She did tell me that there may be updates available per map, as was done before, or through the monthly wolf updates featured on the ODFW site. Michelle was not sure how they would handle the specifics at this point in time.

When I asked Michelle when the battery on Journey’s collar was due to be changed and if ODFW staff would tranquilize the wolf and change the battery, she deferred me to John Stephenson, Fish and Wildlife Biologist with the US Fish and Wildlife Service, as wolves in the western part of Oregon are still under federal protection.

What is bringing Journey back north? Is it the sense of  spring in the air? Perhaps this time of year is kindling memories of wolf pups and all the activity this event brings to the pack? We will never know, for the mind of the wolf is something we can only pretend to understand. Whatever the reason, let’s send rays of  golden light to Journey to keep him safe, wherever he may go.

4 thoughts on “It’s Official: Journey is Back in Oregon!”