The next best thing to attending the recent symposium hosted by the International Wolf Center is to have good friends who go and are willing to share their experience.

Friend and fellow wolf advocate, Rhonda Lanier, of the wonderful non-profit Wolves of the Rockies, was kind enough to write up her experience of the symposium to share with you.

Rhonda and I stood side by side at Yellowstone National Park a year ago this month, sharing our first wild wolf sighting. Truly a bonding experience and one we will never forget!

Thank you, Rhonda, for sharing this and for all that you do for wolves!

Here are her words and photos…

I was fortunate to be able to attend the Wolf Symposium with Marc Cooke and Kristi Lloyd, two of my colleagues from Wolves of the Rockies. Rob Schultz, the Executive Director of the center shared that approximately 450 people were attending, which was a quite a turnout, considering they were hoping to have 300.

The first day of the symposium was a fun field trip, the Wolves and Wilderness Bus tour to Ely, MN to visit the Ambassador wolves for the center. The four wolves which are the current ambassadors are Aidan and Denali, brothers born in April 2008, and the two youngsters of the group, Luna and Boltz, born in March 2012. Luna is the only black wolf and the only female. More information on each of these beautiful wolves can be found on the website. I have to say I could never decide which was more handsome, Aidan or Denali! http://www.wolf.org/wolves/experience/meet/AmbassadorWolves.asp

Friday morning after opening remarks the first item on the agenda was A Debate About Wolf Recovery. The panel members included Mike Phillips, State Senator for District 33, Bozeman, MT;  Ed Bangs, U.S. Fish and Wildlife Service’s Gray Wolf Recovery Coordinator for the northwestern U.S. from 1988 until his retirement in June 2011; and Larry Voyles, Director of the Arizona Game and Fish Department. I have to say I was completely and totally surprised to find myself at the end of this session a huge fan of Mike Phillips. I can honestly say this is the only politician I have ever made this statement about! Mike’s knowledge, passion, drive and commitment not only to wolves, but to all wildlife, and the national parks and forests which they inhabit truly is something to see. If there were more people like him elected to public office, our job as wolf advocates would be so very much easier.

On Saturday morning Bob Ream, the past Chair for the Montana Fish, Wildlife & Parks Commission, lead a panel discussion “Moving from Recovery to State Management of Wolves”. The participants included:

I am sure everyone can relate to how difficult it was to sit there and hear over and over basically the same thing from each and every one of these gentlemen: wolves are fully recovered, wolves are being managed like any other wildlife, their states have an approved wolf management plan which complies with ESA and U.S. Fish and Wildlife Services requirements, and they are using science-based decisions in order to meet minimum delisting criteria.

Bob Ream, ever the gentleman and professional that he is, reminded us at the end of the panel session when a few questions were allowed, they were to be respectful, even though more than likely we disagreed, as they were only the messenger for these states and not the legislators and state officials who made them. Other than totally disagreeing with the statement that wolves are fully recovered (they are only recovered politically), I most disagreed with the claim that wolves are being managed like other wildlife. As we have seen just in the targeting of Yellowstone’s wolves alone, no other carnivore is subjected to the brutal, relentless and unnecessary methods that drives many hunters in seeking to kill a wolf; not black bears or grizzlies and not mountain lions. It is always the wolf that is blamed and targeted.

But difficult as this session was, I must say the session following was without a doubt the most difficult to sit through, for me anyway: “A Debate about Wolf Hunting and Trapping” and “Working Toward Consensus”. The members of this panel were:

To have to sit only a few feet away from two people whose philosophy of how wolves, or any wildlife for that matter, is a complete 160° from what drives so much of my life as a wolf advocate at times literally made me sick to my stomach. Howard Goldman made the opening remarks which included what we all know: the delisting of wolves that occurred in was drive by politics; it was not driven by science. When he made the comment that killing wolves was simply recreational, Jim Hammill immediately replied that calling it recreational “is an affront to me”. “Hunting is my life”. I should say it is; to also include canned hunting. Mr. Hammill is the President of the Northwoods Safari Club International, which is in Michigan. Well Mr. Hammill, I would say we are even, the recreational hunting of wolves is an affront to me and I would say most of the people who attended the symposium.

Mr. Leistico is a trapper. He said he loves trapping and has been doing it for 40 years. He represents trapping associations in the state of Minnesota and nationally. He acknowledged that obviously many people in attending the symposium were against trapping, but that differences of opinions were just that opinions and his is obviously not ever going to change. Mine isn’t either. He made the comment that he thinks it is important that we don’t let these moral and ethical issues or feelings guide us so much that we don’t look at the science. I am not sure what trapping has to do with science, other that the states just keep repeating over and over “trapping is a required management tool”. I guess this is where differences of opinions come into play. I will never, ever support trapping of wolves, or any other animal for that matter. 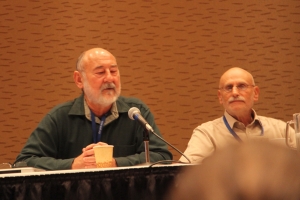 I believe Paul Paquet, the Canadian wildlife biologist received the biggest round of applause when he made the very simple, eloquent and true statement: “Science doesn’t give us permission to do anything,” said Paul Paquet, a Canadian wildlife biologist opposed to what he called recreational killing of wolves. “This is a question of ethics. This is a question of morality.” It certainly is a question of morality. It is a test of personal morality, which many so-called hunters, unfortunately backed by legislators at both the federal and state level are failing. So once again, it is the wolves that must pay for that lack of morality with their lives and the lives of their packs, many who are just pups.

I enjoyed the conference tremendously though. It was great to meet so many wonderful people, most of whom do support having wolves on our landscape, and were willing to make the effort to travel to Duluth in order to meet other wolf advocates and get the education and information needed in order to make their voices even stronger for wolves.

From a personal standpoint it was simply wonderful to finally meet so many people that I have come to admire in the in the world of wolf advocacy. People like Garrick Dutcher of Living with Wolves, Doug Smith and Dan Stahler of the Yellowstone Wolf Project, and John Vucetich, Associate Professor of Wildlife Ecology at Michigan Technological University.

I would say the highlight for me, and I am sure I can speak for my colleagues Marc Cooke and Kristi Lloyd, was the Friday evening in the Harbor Side Ballroom when our good friend Bob Landis shared his documentary on Yellowstone wolf F832, but known worldwide simply as 06. It will soon be a year since 06 was shot and legally killed by a hunter in Wyoming. At the time of her death there was an outpouring of grief and anger from all over the world. I do not believe that anger and grief has diminished at all. The ball room that night was filled with love and respect not only for 06 but concern for her pack members and the destructive impact her death had on the Lamar Canyon Pack. The applause at the end was thunderous and as people left the ballroom, many of the comments I heard was they couldn’t wait for the documentary to be released. Bob’s tribute to 06 is a work of love and admiration for a truly remarkable wolf that will be remembered and talked about for years and years to come.

But on Saturday at the banquet there was yet another highlight for yet another dear friend. Three awards were given out to three very deserving people “who speak for wolves”. And one of the recipients, much to his surprise, and to our complete delight, was our good friend Carter Niemeyer. I cannot think of a more deserving person to receive such an award. Carter’s huge frame is served by his equally big heart. Although Carter is officially retired from USFWS, he works year round to educate people about wolves and how they can coexist with this incredible animal. Washington State University has very wisely hired Carter to teach non-lethal methods of predator control to ranchers. This is a huge step in the right direction for the state. I just wish the states of Montana, Wyoming, and Carter’s home state of Idaho would wake up. 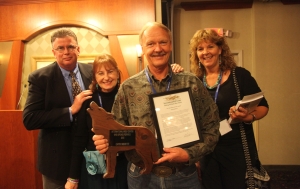 We were having lunch on Saturday with Bob Landis and Kathie Lynch and Bob asked us if we thought the momentum from symposium would continue. Bob, I certainly hope so. We all know that being a wolf advocate is one of the toughest jobs in the world and most of us do that job as volunteers. We have to keep educating people and we have to keep contacting and contacting again the people elected to public office, whether at the state or the federal level. It is sometimes overwhelming for sure, but it is what we do because we care, and because we are their only voice.