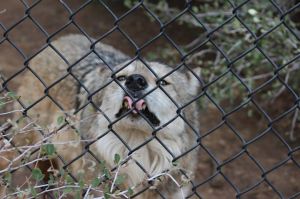 Once again, good friend and fellow wolf advocate, Rhonda Lanier of Wolves of the Rockies, brings us another insightful wolf report. This time she visited the California Wolf Center in Julian, CA.  On Saturday, the Center featured wolf biologist John Vucetich.  John is an Associate Professor at Michigan Tech and co-director, along with Rolf Peterson, of the Isle Royale Wolf-Moose Study. Rhonda attended the event at the Wolf Center and wrote this account of her trip (appeared on Wolves of the Rockies website 11/1/13):

November 1, 2013 at 6:22pm
It is always a pleasure visiting the California Wolf Center just about five miles outside the charming little mountain town of Julian, California, which is in Southern California; they are working very, very hard to make sure that education and tolerance is in place, when hopefully, OR-7 finds his lady love and has pups. Plus it is always a thrill to see the ambassador wolves at the center; just being in the presence of a wolf, any wolf, fills me with such wonder. I am sorry to say, the artic and gray wolves were not very cooperative in letting me get their picture, as I was in conversation with someone and a little late in getting out to see the wolves. By the time I did get out, they had decided these people staring at them simply wasn’t all that interesting and decided to wander off to take a nap. If anyone was lucky enough to have gotten pics of the artic and gray wolves, if you would care to share them with Wolves of the Rockies, we would be grateful, and would of course, give you credit for any pics you share. I did get shots of the Mexican Grays and just loved seeing them rubbing their cheeks against the fence, marking their territory, as if to say, “if you stay on that side of the fence, everything will be okay”! Click this link to see the wolves and learn all about the many things the California Wolf Center does.

http://californiawolfcenter.org/about/meet-our-wolves/
However, the real delight of the day was getting to hear John Vucetich speak about the wolves and moose on Isle Royale in Michigan. I knew the treat we were all in for as I had been fortunate enough to meet John and hear him speak at the International Wolf Symposium in Duluth, Minnesota a few weeks ago. John’s compassion, knowledge and love for all living creatures is something that is apparent just minutes into his presentation: if you like to walk, eat meat, and hang out with your family and friends, you have so much in common with wolves. They are really just like humans; they want a safe environment to raise their family and enough food to feed that family. Such a far cry from what so many of “antis” would have you believe is it not? As I listened to John speak about the wolves and the moose on Isle Royale, I was truly fascinated. John explained how healthy moose have nothing to fear from wolves. He then went on to tell how a wolf, an animal ten times smaller than a moose will charge up to a moose and stop within six feet of the moose. You know what happens? If the moose is healthy, nothing; the moose just stands there looking at the world. The wolf, just to make sure more than likely will make the same charge. Nothing. The point being: healthy moose have nothing to fear from wolves. I don’t know about you, but I find that quite an interesting point.

John also shared another fact that I found very interesting: we all know how superior the wolf’s olfactory skills are: however, consider this. Due to moose eating and chewing on trees during the winter, it is not surprising to learn they can develop dental problems, such as an infected tooth, which in turn creates a bacteria problem in the moose’s mouth. John said the bacteria create a very pronounced smell, easily detected when scientists and biologists are examining a moose carcass; something he is able to detect. A wolf’s sense of smell is so keen they can smell these bacteria even before they see the moose! This is obviously another skill the wolf has that the hunter does not; how they are able to detect the weak and afflicted moose and target them; thereby ensuring the strongest survive and breed. Another thing John shared is some interesting facts on why ravens are always associated with wolves; many refer to them as the “wolf bird”. Turns out that wolves do not have what you would call a very good digestive system. Wolf scat has a very high content of protein, thus providing the raven with a complete meal in and of itself. Smart birds for sure!! Another fact we all know, which John confirmed, is that it is incredibly hard for wolves to get a meal; contrary to what you will hear on the wolf anti-sites. It is all about endurance. Just consider walking about eight hours a day, and in the winter this can be through several feet of snow. That in of itself is quite a feat in stamina and persistence. Wolves then have to take down an animal weighing 1,000 pounds, enduring kicks with the hind legs and dealing with horns in many cases when attempting to seize the moose’s nose. All this action can of course end up with broken teeth and ribs. John said it was very rare for a wolf to reach the age of two without suffering battle wounds. Unlike the humans who hunt for “sport”, wolves only have their strength, skill and intelligence to bring down their prey. Yes, sarcasm intended. As many of us advocate for wolves know, the life of one wolf can truly make a huge and significant difference on the landscape on which they live. In the case of the wolves on Isle Royale, wolf #93 was that wolf. He was known as “The Old Gray Guy”, and was first detected through his scats in 1997. It was determined he was an immigrant from Ontario, Canada and believed to be the first immigrant to Isle Royale since the population was first founded in the late 1940’s. He sired a total of 34 surviving pups during his lifetime, transmitting much needed new genetic viability to the isolated wolf population. He arrived on Isle Royale by walking across the 15 mile ice bridge, which separates the island from the Canadian shore. Here is a link to an article published in the New York Time in April 2011 about The Old Gray Guy; and a handsome gentleman he was. http://www.nytimes.com/2011/04/05/science/05wolf.html?_r=0 There have been many articles published lately on whether or not humans should interfere and bring wolves into Isle Royale to provide new genetics to the few remaining wolves. I do believe that humans should interfere and keep the wolves from what appears will lead to their total extinction. I am of this opinion because it was humans who illegally brought a dog on the island in 1981, infecting the wolves with canine parvovirus. By 1982, the wolf population had plummeted. It has also been suggested to wait and see if another wolf crosses over from Canada like the Old Gray Guy. Unfortunately, thanks to climate change, the ice bridge that used to occur every two or three years, now only happens once a decade. See the attached article from arstechnica. If we could interfere to save the Florida panther, I believe we should also interfere and save the eight remaining wolves on Isle Royale. http://arstechnica.com/science/2013/05/silent-summer-no-wolf-pup-yips-heard-on-isle-royale/ I hope you will visit the website for the Isle Royale Wolves. The information provided John Vucetich and Rolf Petersen is incredibly interesting and informative. http://isleroyalewolf.org/overview/overview/at_a_glance.html

John and his Wolves of the Rockies tee.

6 thoughts on “John Vucetich at the California Wolf Center”